The xPasser Give-N-Go sounds like it is a training aid that is only made with skaters in mind. However, goalies are not excluded. This is the first goalie drill of many.

The xPasser works as a portable teammate and an obstacle for skaters, making it a friend or foe for the goaltender in the crease. Watch the video below to see our first xPasser Give-N-Go goalie drill in action.

As you can see, the shooter passes the puck to the xPasser, receives it back, works around the Give-N-Go, now acting as a barrier between the player and the goaltender, and takes a shot on net.

Watch the goaltender in this drill. When the shooter passes, the goalie goes down into the butterfly and acts as if the shot is coming his way. This is to mimic a shot or pass coming through traffic; oftentimes, it gets blocked, but the goalie still prepares whether it’s through traffic or not. The initial pass to the xPasser helps the goalie’s mindset in preparing for lateral butterfly movement. The goalie must then prepare for the shot coming from the side of the slot, all while maintaining his butterfly form.

There are many other options to consider when using the xPasser Give-N-Go for goaltending training. We will showcase them here on the Everything Hockey blog.

To purchase the xPasser Give-N-Go, choose your link below: 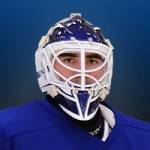